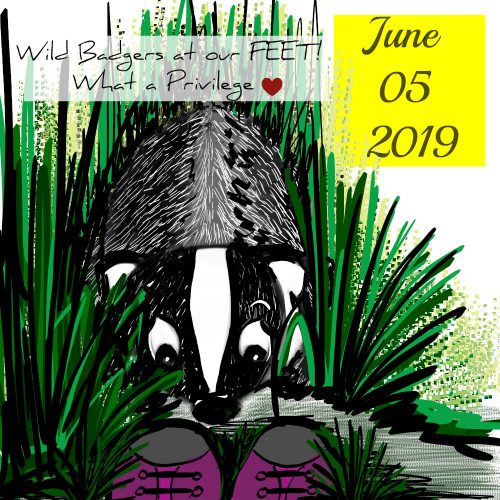 Wild Badger Cubs At Our Feet

We went for a late evening walk as you do in summer and we heard the birds alarm calling, seeing a tawny owl being chased off by a blackbird, some small birds and a jackdaw so we took chase and followed them. We didn’t see where they went, but we did see two young badgers foraging for snails and then without even having to leave the path we had them at our feet.

My hubby filmed them on his mobile phone, his phone doesn’t have a zoom feature (his arm is the zoom) so you can see how close we got to these two young badgers.

They where so close we could have reached out and touched them, but I value my fingers too much for that :)

The noise they made when they are eating is amazing I feel so privileged to have been so close and the snuffling was so cute. Seeing an animal naturally forage for food is out of this world. It’s nice I’m sure to feed them in your garden but to see them exhibit natural behave is special.

This experience means so much to us. My hubby you see is disabled and can’t sit for long periods of time, it causes him excruciating pain, so we can’t sit and stalk wildlife in a hide waiting for an animal to turn up for hours on end. To experience anything has to happen in front of us at that moment we are walking by. We never could have imagined in our wildest dreams that we would ever get this close to badgers in the wild.

Got to say since they were youngsters I was nervous that an adult would attack us if one came by and my legs were shaking from both excitement of the privilege I was experiencing and apprehension of the what ifs.

I’d recommend you watch the longer video at the bottom of this post. I say longer, it only 4 minutes long, but people have very little patience these days so the two shorter videos above gives you the highlights but the longer video gives perspective of the experience and is much more enjoyable.

If you listen to the full video you can hear the tawny owl we went to find and the alarm calls from the birds the birds that flew after the tawny owl in hot pursuit. if you are kind enough to watch the longer video and you’re wondering what I don’t care about in the video it’s that my hubby is telling me I had mosquitoes landing on me.

Luckily I didn’t get bitten, but my poor hubby was covered in bites on his face and hands and had a bad reaction. He also got nettled, but he says it was worth it, to get our experience on film.