The tallest tall juggler is a character from the currently (June 2016) unpublished picture book Mia Saves the Circus.

The Tallest Tall Juggler as the name suggests is very tall and can juggle.

These are very early sketch ideas, Marie wasn’t set on how to draw him and before developing further we decided to work on another picture book manuscript that was more likely to be published: That Greedy Goat Just Cannot Stay. 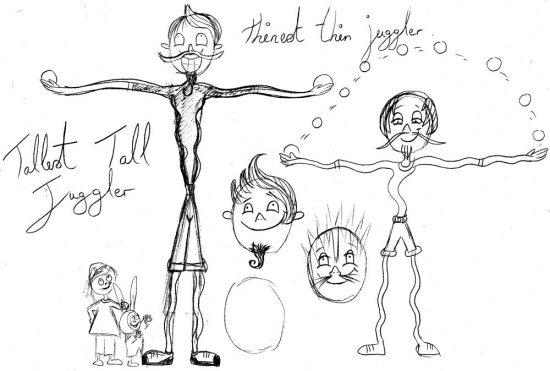 The sketch was just a quick pencil sketch, I darkened the lines using GIMP’s Threshold tool so it looks more like a pen drawing.

Here’s the original pencil drawing before using the Threshold tool: 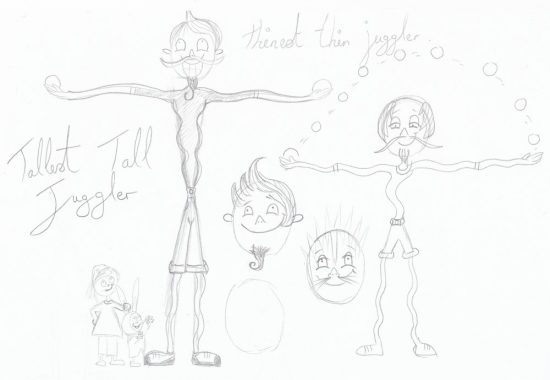 You will notice Marie wrote both Tallest Tall Juggler and Thinnest Thing Juggler. The story has an educational element for comparing related word:

Plan is to create a bunch of educational worksheets for kids to learn about the differences between strong, stronger, strongest etc… and Tallest Tall Juggler would be easier to create worksheets for when compared to the Thinnest Thing Juggler.

We really got carried away when writing the tallest tall juggler’s part of the story (entire story is over 1,400 words which is a bit long for a picture book today :-(). End result was 276 words just about the juggler and what he juggles, could be spread over 14 pages of a picture book (a tad too long :-)). We did the same with the Strongest Strongman part of the story as well.

The jugglers did juggle
with clubs, balls and rings.
Then The Tallest Tall Juggler
juggled more things.

“I’m a juggler,
a juggler,
the best juggler of all.”
Said The Tallest Tall Juggler,
“I won’t let them fall.”